The Prepared Homestead and the Power of Resilience

Will The Pandemic Treaty Help Us?

Alternative Health and the Power to Control Anxiety

Nutritional Myths, What You Need to Know

5G: The Dangers of Electromagnetic Radiation

Christian Faith and the Power to Control our Health and Lives

Immune System: How to Enhance it Naturally

Challenging Socialism and the Great Reset 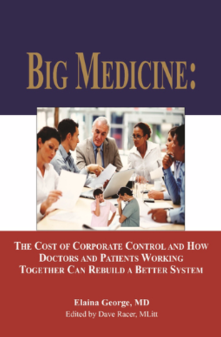 Dr Elaina George is a Board Certified Otolaryngologist. Her interest in the politics of healthcare and the reform effort have led her to become both a powerful voice for the practicing physician, an advocate for the patient, and a healthcare policy analyst specializing in healthcare consumer driven solutions. She graduated from Princeton University with a degree in Biology. She received her Masters degree in Medical Microbiology from Long Island University, and received her medical degree from Mount Sinai School of Medicine in New York. Dr George completed her residency at Manhattan, Eye Ear & Throat Hospital. Her training included general surgery at Lenox Hill Hospital, pediatric ENT at The NY-Presbyterian Hospital, and head and neck oncology at Memorial Sloan-Kettering Cancer Center. She has published in several scientific journals and presented her research at national meetings. As a solo practitioner in private practice who is also a small business owner, she has a unique perspective on the problems of health care delivery, the true costs of healthcare and viable solutions. Dr George is a recipient of the Patients’ Choice Award in 2008 and 2009. She was honored with membership in The Leading Physicians of the World and Who’s Who Top Doctors Honors Edition.

She is a member of the National Physicians Council on Healthcare Policy and has been a contributor to a wide variety of websites including BigGovernment.com, Newmediajournal.us, and Amy Ridenour’s National Center Blog. Dr George has been a recurring guest discussing a wide range of medical topics from Your World with Neil Cavuto, Financial Survival Network With Kerry Lutz and Newsmax, to appearances on Frances & Friends to discuss the consequences of healthcare reform with a world wide audience of over 500 million people. She has also been a medical expert on a range of shows including The Bill Cunningham Show, Cowboy Logic, Lions of Liberty, The Barry Farber Show, and The Kev Baker Show. Dr George hosts her own show, Medicine On Call, a weekly talk show that explores health issues and the politics of medicine on Americas Web Radio and Liberty Talk.fm Radio. She is the author of Big Medicine: The cost of Corporate Control And How Doctors And Patients Working Together Can Rebuild A Better System – A book which explores how the US healthcare system has evolved and explains how patients and doctors can create a healthcare system that is based on the principles of price transparency with the power of the doctor patient relationship.

Dr George is available for speaking engagements for both university and corporate audiences. More Information Here

Listen to Dr. George on her program Medicine on Call on  Libertytalk.fm on Sat-Sun at 12 noon. The program will highlight healthcare policy, the politics of healthcare, the power of the doctor and patient relationship, and solutions that will help the patient to become a savvy healthcare consumer. It is the place where healthcare, business and current events connect.

Subscribe to the Medicine on Call podcast at iTunes!